When Trevose Golf and Country Club’s iconic fourth hole was hit by the tail end of four Atlantic hurricanes in 2017 – its greenkeeper took the course by storm when he turned an unplayable hole into a putting paradise in less than four months.

Flying in the face of convention, course manager Neil Ivamy used a Barenbrug ryegrass on the damaged greens to get it back in play, and has never looked back. Now players are commenting that the putting green is better than the original.

Weather watch
Ivamy had many sleepless nights when the fourth hole on the prestigious Championship links course was damaged by weather in 2017.

Designed in 1925 by world-renowned golf course architect Harry Colt, the course is 20 metres from the Atlantic Ocean on the north coast of Cornwall and its forth hole is raised up so players can appreciate the stunning views across Trevose Head to Booby’s Bay, Mackerel Cove and further out to Quies Rocks.

“We’ve always battled against the elements here, given our location, but in 2017 we bore the brunt of Atlantic storms such as Ophelia, Caroline, Dylan and Eleanor,” says Ivamy, who has been at the course for 10 years. “The grass was bombarded with salt water and spray over many months and by October there was a rapid decline in the grass. Yellow patches appeared and eventually the fescue thinned out and died. We had to take the difficult decision to close the hole.”

Bring into view
Offering the best views on the course, the temporary closure of hole four was a major headache for the leading links course, but especially for Ivamy.

“It was particularly hard to take as we’d put a lot of effort into the hole the previous winter after a redesign with golf course architects Mackenzie & Ebert. We knew we had to call the experts in,” says Ivamy. “David Greenshields from Barenbrug visited us and recommended oversowing with ryegrass. Although this was unconventional, we both agreed it was the best approach. With cooler temperatures than normal for this time of year, ryegrass varieties such as Barolympic have the benefit of growing at temperatures as low as 4°C and are also salt tolerant. If the rye became a problem for us we would spray it out with a graminicide at a later date, but so far this hasn’t been the case”

With the help of 2,700 sq metres of germination sheet to warm up the soil, Ivamy did a first sowing in March – and waited with bated breath.

“The green was back to full coverage by June, which was a very quick turnaround,” he says. “The grass is more blended and the putting surface is better overall. Players have commented that it’s far better than it’s ever been, which is great to hear.”

Tour de fourth
With the high-traffic, family run course seeing 40,000 rounds a year, the ryegrass also has the added benefit of coping well with wear and tear.

Its success couldn’t have come at a better time. The Trevose team has just been informed the course has been chosen to host the new European Legends Links Championship on the Staysure Tour. And with the course centenary just around the corner, Ivamy is confident that the playability of the fourth hole will continue to exceed expectations.

“This experience has really opened my eyes to the versatility of the dwarf ryegrasses, and using them in other areas we might not have thought of,” says Ivamy. “I’ll definitely be using Barenbrug exclusively this year.” 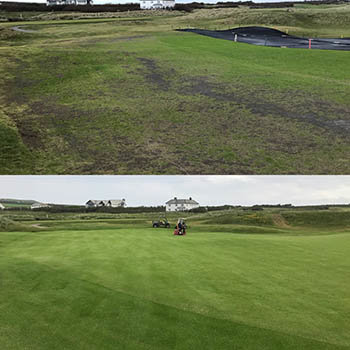 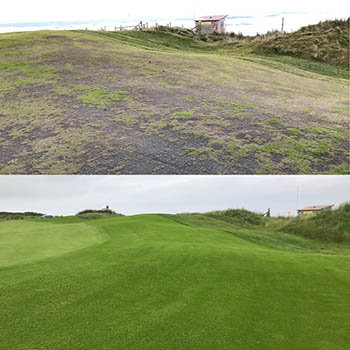 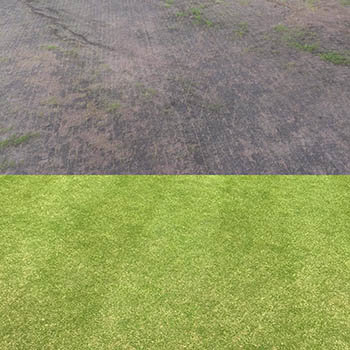