Dry summer has proved no match for Kent Greenkeeper

Solutions at the Royal Cinque Ports course in Kent

With the driest summer on record since 1961, this year has been one of the most challenging in James Bledge’s three years as Course Manager.

Already battling with the sandy soil and sea breezes at the Royal Cinque Ports course in Kent, Bledge has turned to a range of drought-busting tactics to tackle 2018’s low rainfall at the 126-year-old championship links course.

Despite the heatwave, the teams efforts - and the “bounce back quality’ of the Barenbrug grass seed - has helped the course turn a corner, and seen it rated by one golf magazine as one of the top seven courses in England.

Sun, sea and sand
With the course based along a very thin piece of land on the Deal coastline, Bledge has had to learn to work with shallow topsoil.

“The course leaches water and nutrients constantly and it’s hard to maintain moisture levels,” he says. “What’s more, the fairways and greens have severe undulations so it can be difficult to get uniform colour.”

The low rainfall has resulted in a 5-10% browning of the fairways after grow back in particular – but Bledge has been blown away by the ability of the Barenbrug seed to grow back.

“I joke that the motto of this grass should be: ‘you can kill me, but I’ll keep coming back’!” he says. “We seeded the semi rough with RPR and UltraFine but we were unable to get water to this area for various reasons. Despite this, the grass is germinating again, and there are lines upon lines of new growth. It’s pretty remarkable considering it has had no water for months.”

Other areas of the course faired better with the UltraFine dwarf ryegrass on the tees performing well.

“These parts of the course have very heavy traffic – some 35-40,000 rounds of golf a year – but we’ve never looked back since we started using Barenbrug seed on these areas,” says Bledge, who is overseeing the installation of a £1million new irrigation system across the course this year. “Germination has been fantastic.”

In fact, Bledge and his team almost started from scratch on the fairways, approaches, tees and long roughs only a few years ago.

“We killed off the grass we didn’t want in these areas using a selective graminicide – quite a bold move really – but it’s given the other grasses a head start and thanks to this new improved seed it now looks fantastic,” he adds.

Heatwave weapon
The dry weather has led to Bledge using some unorthodox methods too.

“My secret weapon has been my Senior Greenkeeper Mac, who celebrated 40 years of service at the course recently. He prefers to sleep in the afternoon so at 2.30am every morning he’s out hand watering all the greens, approaches, tees and high spots on fairways. He loves it – and so do we!” says Bledge. “Hand watering saves water as it gets to where it needs to go and targets tricky areas that are missed with blanket watering.”

With visitor numbers swelling, Bledge says he is considering experimenting with cold seeding this year to extend the season too.

“We’ve noticed when we sow our Barenbrug seed in winter, we still get fantastic results the following spring – just a little later, “he says. “The grass sleeps over the winter but jumps straight back into action when we need it.”

“This has multiple benefits. Sowing later allows us to use the course for competitions in October and November without disruption, and means members can play for longer without us digging up the green beside them. In the long term the club makes more money for a longer period, so it’s a win-win for everyone!” 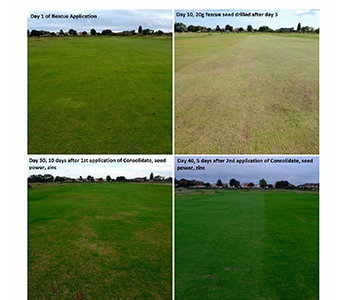 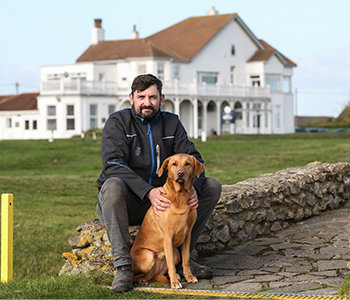 Using Barenbrug’s RPR (Regenerating Perennial Ryegrass) technology for fast establishment and unparalleled capacity for recovery from wear due to the self-regenerating growth habit.