There are lots of weeds that can invade pastures, and here we have tried to list all the ones that are relevant to grassland and pasture in the UK.
For more specific advice on how to control weeds in your grassland visit Dow Agrosciences website at http://uk.dowagro.com/product-category/grassland/ 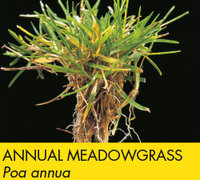 Annual Meadow-grass is a low-growing grass which is a light green colour.

It grows from a central base, to which all the shoots can be traced, and has a creeping rootstock.

The blade-like leaves are blunt-tipped and the yellow-green flower head is triangular with branched spikelets that contain the flowers. There are 150 species of thistles worldwide, with 20 in the UK 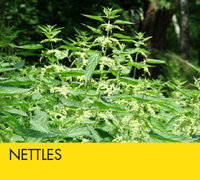 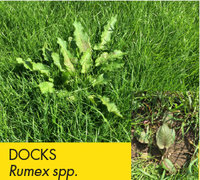 Docks (Rumex spp.) are the most pernicious and damaging of all grassland weeds. 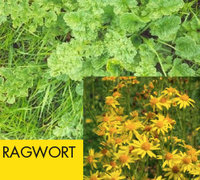 A critical weed to be able to identify, and remove, is Ragwort. This weed is potentially deadly to livestock and is listed in the Injurious Weeds Act, which occupiers can be required by law to control. Under the Ragwort Control Act (2003), a code of practice was developed giving guidance on identification, priorities for control, methods, environmental considerations, and health and safety issues. 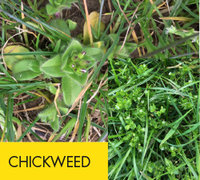 Common Chickweed is the most common annual weed and can persist in rotational grass and establish in long-term pastures where there are gaps in swards due to poaching or slurry injection. 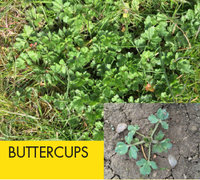 Creeping buttercup is the most common species and is a problem in heavily grazed, poached or wet pastures.