Ploidy?! Diploid and Tetraploid?! What does all this mean?

You often see the words ‘diploid’ or ‘tetraploid’ next to our ryegrass names but what do these terms actually relate to and how do they influence your grass crops?

“Ploidy” refers to the number of chromosomes in a ryegrass’s cells. A normal ryegrass plant contains two sets of chromosomes per cell, 14 in total, and is referred to as diploid.

By inhibiting cell division (usually with the use of the chemical colchicine) at a very early stage, plant breeders can create tetraploid plants, which contain four sets of chromosomes, 28 in total. Tetra comes from the Greek for four. This process has long been part of a breeder’s repertoire in the search for large productive ryegrass varieties for use in the agricultural forage market.

Diploids have smaller cells and so more structural cell wall material compared to the tetraploid cells which are larger, and so overall the tetraploid plant is higher in water soluble carbohydrates (sugar).

The Key benefits of diploids

This increased sward density helps a grass crop to:

The Key benefits of tetraploids 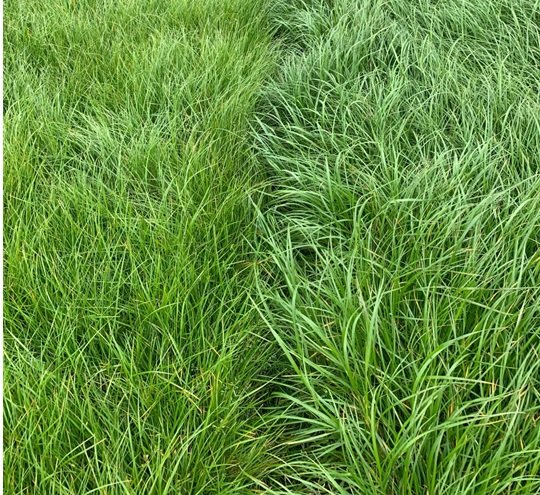 Both types of grass are important and that is why we use mixtures allowing grass farmers to get the benefit of both with balance.

For those with a shorter-term rotations and/or more requirement for silage than grazing, a higher proportion of tetraploid can be used. Bear in mind that increased silage pressure on a plant which is already more open, can reduce overall persistency. Increase sowing rates and/or utilise grazing to improve sward density. Never sow anything with more than 50% tetraploid for a short-term rotation and ideally, reduce that percentage for a medium – long rotation. Be prepared to overseed should a sward become very open.

Tetraploids are ideal for overseeding because their bigger seed has more resources for a faster establishment making them more competitive with existing, established plants. Use specialist mixtures and techniques for overseeding.

For long term rotations or permanent grass, a greater emphasis on diploids is necessary. Their ability to form a dense sward is essential for long term persistency and resilience. A balance of 2/3 diploid to 1/3 tetraploid is sensible where swards are required to last for many years.