Is it OK to use perennial ryegrass on a green?

Is it OK to use perennial ryegrass on a golf green?

Luke Hunt, Barenbrug UK's Product Manager says, "In the course of my work visiting golf courses around the UK, I find myself getting asked a regular question – “is it OK to use perennial ryegrass on a golf green”? The answer, as with many things related to greenkeeping and turf care, is not a straight yes or no! As a breeder of fine-leaf ryegrasses, we can shed some light on the subject and try to give some clarity to the question."

Why would you use Ryegrass in a green?
It is fair to say that most turf managers have seen the benefits that perennial ryegrass can bring to tee boxes, fairways and high traffic areas, as well as the advantages of rapid germination at low soil temperatures. Over the years advances in ryegrass breeding have given us varieties that are fine, dense and able to tolerate mowing heights comfortably down into the single figures. At the same time, we are also seeing disease becoming harder to manage due to limited chemistry, increasing levels of play 12 months a year, and also a more demanding golfer who expects more in terms of all round performance and presentation. So, it is only natural to look at the positive experiences that have been had on areas through the green with ryegrass and consider the option of introducing it into the greens.

How does it compare to other grass species?
I sometimes hear the comment that ryegrass varieties have caught up with other perennial grass species in terms of their fineness, density and aesthetics under close-mown conditions. Whilst it is true to say the ryegrass varieties have improved significantly, they are not at the point where they are comparable in these traits with the most widely used species for golf green overseeding, browntop bent, see picture1. In the BSPB Turfgrass Seed booklet for 2022, the number one variety of ryegrass for close mown turf is Barolympic with a score of 8.6. The number one variety of browntop bent has a score of 7.6, however these scores cannot be compared to one another and only represent their performance in comparison to other ryegrasses and browntop bents respectively. 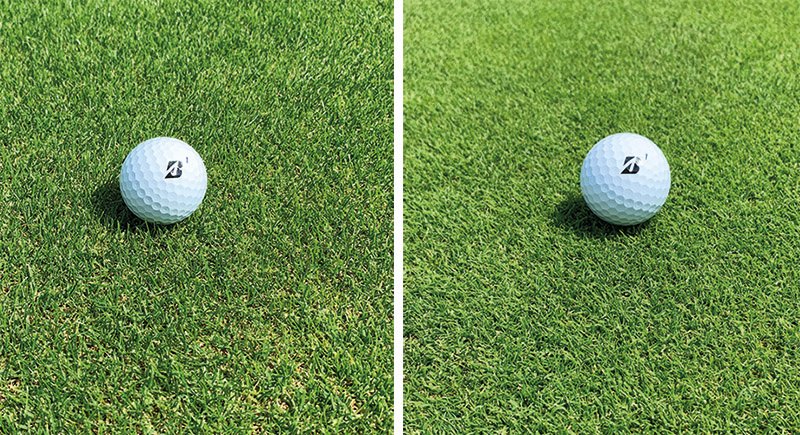 Ryegrass based putting greens?
As far as constituting the dominant species in a golf green goes, the answer is no - or at least it is a no for the time being! A perennial ryegrass dominant sward will not produce a surface that meets the expectations of golfers in terms of putting quality. However, there are scenarios where using ryegrass on a green is a viable option and can provide a solution.

Repairs to disease scars or other damage:
The cold springs that we appear to experience year on year present a challenge when it comes to repairing the inevitable disease scars that are left behind from the winter. With fescue requiring 11 degrees Celsius and browntop bent requiring 15 degrees Celsius for decent germination, getting successful establishment may not be possible in the months of March and even April. However, ryegrass, which only requires ~8 degrees Celsius for similar germination, gives us the opportunity to restore grass coverage in the spring.

Reinforcement of high wear areas:
For greens that may struggle with shade or higher moisture levels, some thinning of the sward is not uncommon particularly on areas of the clean-up lap or walk on/off areas. Overseeding areas such as these with rye grass will increase the overall wear tolerance, protecting the existing grasses and help to reduce thinning of the sward. In such areas it must surely be better to achieve some grass cover from ryegrass than having to tolerate reducing grass cover or even no grass cover at all. It is probably the case that overseeding with ryegrass is not the long-term solution, but as a short-term fix it is there as a good option.

What are Barenbrug doing?
First and foremost, Barenbrug is a breeder of grasses, so we are always working in the background on the next generation of ryegrasses. We are always looking to develop varieties that are finer, denser and better able to withstand close mowing. Can we breed a ryegrass that matches bentgrass? The answer is probably no with current breeding technologies and techniques available to us, but this may change over time.

However, right now we are involved in research work with the Irish Sports Turf Institute looking at the performance of different grass species in a greens management situation, including ryegrass. We are evaluating its long-term performance at a low height of cut both on its own and as part of a mixture with other species. A key outcome of this trial will be to understand just how well ryegrass survives under close mowing pressures.

So, although the time has not come for establishing and managing ryegrass dominant greens, the advancements in ryegrass breeding and the quality of available varieties does make it an option in certain situations. When it comes to areas of high wear and repairing damage, ryegrass can give something that other grasses cannot offer. 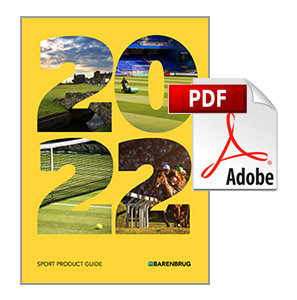 A 30% perennial ryegrass with red fescue, designed for the construction or overseeding of fine turf under moderate wear pressure.

A 60% blend of fine turf perennial ryegrass and red fescue, designed for the construction or overseeding of medium-fine and fine turf under high wear pressure.

A 100% blend of fine turf perennial ryegrasses, simply offering the best fine ryegrass on the market.