Looking to find the next generation of ‘herbal ley’.

As well as trialling our grass varieties and mixtures, we have established a number of biodiversity plots at Cropvale as part of a larger European trial looking to find the next generation of ‘herbal ley’.

Featuring up to eight different species, the plots include better known species such as red and white clover and chicory alongside lesser known or, at least, less commonly used species in the UK. The trial plots also include a blend of perennial ryegrass, soft leaf tall fescues and timothy.

The aim of our biodiversity trials is to come up with an optimum blend, or a series of blends, of legumes, herbs and grasses, which will be suitable for a wide range of grassland farmers throughout the UK and Europe. Ultimately, we want to come up with blends that will produce large volumes of high quality forage for livestock farmers to be able to feed to their animals to increase meat and milk yields - in a way that has the least environmental impact.

Including legumes in a biodiversity blend is one way to achieve this, such as Lucerne. Legumes have great nitrogen (N) fixing potential, which means less artificial nitrogen needs to be added to the soil to grow the crops. Deep-rooted species are also employed to improve soil structure while flowering species are utilised to help pollinating insects do their job.

Due to the nature of the species involved, weed control in our biodiversity trials is very limited so we score the plots for their natural weed suppression abilities, which will add to the persistency and quality of a mixture in the field.

Initial trials on the continent have proved very interesting with important observations already captured regarding fertiliser rates and sward composition. There are now several batches of seed out ‘on farm’ to investigate the influence of grazing pressure on the sward compositions. This is a process we will eventually repeat in the UK.

Our mixtures designed to offer this;

HERBAL GRAZE: This mixture is a bio-diversity multi-species herbal ley, which will adapt and thrive in diverse locations and soil types. This diverse mixture has been proven to provide a hardy, very long grazing season for ruminants, coupled with multi legume species to fix nutrients to sustain year-long production

PROTA PLUS: First developed and launched in 2012/2013, after trials at Cropvale, and as an adaptation of a Barenbrug France product, is a blend of Italian ryegrass and annual clovers. Prota Plus provides a 12-18 month ley for high protein silage or grazing in season one, with a winter bite for livestock throughout the winter and potential for silage in the following spring. The mixture is very flexible and can be used solely for silage production or for grazing any class of stock, including breeding sheep

BARFINISHER: This is a blend of chicory and plantain (two commonly used forage herbs) alongside red and white clover. The clovers are ideal companions for the broad leaved herbs as they provide some of the N required for the large green leaf area - meaning less bagged input is needed. Deep rooted, and high in protein and minerals, Barfinisher can be sown as a short-term green manure or used for two to three years for grazing livestock. 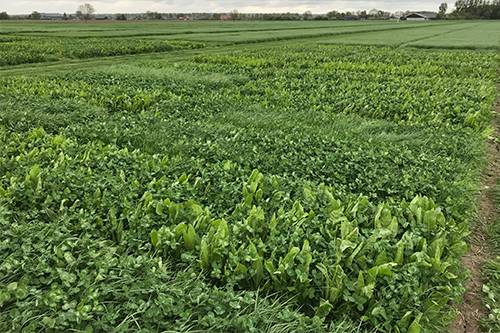