As well as being home to our England and Wales grass trials site, Cropvale is a mixed enterprise farm with beef, sheep and arable production.
Roger Hutchings and his family have farmed the land at Cropvale for almost 60 years. Roger, who manages our grass trials site in parallel to his family business, spoke to BarForage News to tell us more about the history of the farm and how it came to be a Barenbrug trial site.

BarForage News (BF): Thanks for talking to us Roger. Can you begin by telling us a bit about Cropvale and how your family came to farm the land here?
Roger: My Mum and Dad moved to Cropvale Farm in 1959, the year before I was born. Both Mum and Dad have strong farming backgrounds. Dad was brought up on a mixed farm in Warwickshire and Mum has a dairy background. Once they were married, Mum and Dad to moved to Cropvale Farm where there were 50 acres of land. Initially they started off with a few Ayrshires, then they moved on to Friesians. Over the years, the business grew in size with Mum and Dad buying up additional pockets of land as and when they could afford it until, eventually, they’d trebled the original acreage.

BF: When did you get involved with running the farm?

Roger: Growing up on the farm I was obviously involved from a very early age. At the age of 12 I had my own cattle to look after - a herd of Barley bulls that I had to feed before and after school. At sixteen years of age I went to Hindlip College on day release to learn about farm management. At eighteen I left the farm for a year and went travelling - before coming back to Worcestershire to continue working alongside Mum and Dad.

BF: When did you take over running the farm?

Roger: I took over the day-to-day management of the farm in 2000 when Dad retired but, to this day, Mum and Dad still take an active interest in Cropvale. They live just up the lane so they call in most days and Dad still helps out when asked. He often mows the amenity plots on site. Until recently he was groundsman at Pershore Bowling Club so has a real affinity to these grasses.

BF: How has the farm changed over the years?

Roger: Obviously the business has changed considerably over the years. You have to evolve and expand just to stand still in farming, and we’ve tried a number of different things. In 2001 we decided to set up a B&B to supplement the income we were getting from our dairy cows but, just as our plans were coming together, foot and mouth hit, and everything had to go on hold. We struggled on with dairy farming for a few years after the crisis - building the business back up. However, in 2007 we decided – with regret – that we’d have to get out of dairy farming. Our decision coincided with a casual, yet very timely, discussion with James Ingles from Barenbrug, a good family friend. James explained that he was working for an international seed company called Barenbrug and that they were running a UK grass trials site in the next village. The land wasn’t performing as well as Barenbrug wanted and James said the business was on the look out for another location. Discussions evolved and, having bought another piece of land in 2003, which we weren’t doing much with, I invited James up to the farm to take a look. The rest, as they say, is history.

BF: So in 2008, Barenbrug’s trials site moved to Cropvale Farm?

Roger: Yes, in 2007/8 we set up a brand new trials site at Cropvale. Initially I ran both sites for Barenbrug side-by-side, but once the trials eld at Cropvale was fully established, Barenbrug let the other land go. 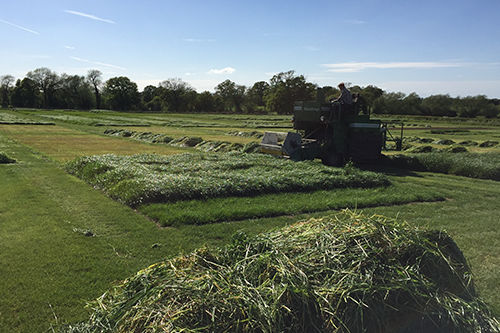 BF: What was it like setting up the site? Did you know anything about managing grass trials?

Roger: As you can imagine, there was an awful lot to learn - not just about setting up the site but also about its day- to-day management. To get things going I worked very closely with James, who also introduced me to David Johnston at AFBI. David talked me through how the trials site in Northern Ireland is managed and I got to visit Loughgall several times to learn about the growing and cutting schedules they have in place there. The information they provided me with was invaluable and to this day, I still call on both James and David when I’ve got something I want to discuss.

BF: Initially, the trial site at Cropvale was focused on forage grass. Is that still the case?

Roger: You’re right, to begin with, all trial plots at Cropvale were for forage grass, but that’s now changed. Today, over half the site is given over to Barenbrug’s amenity grass trials - which I also manage. In addition, the last few years have seen us start trials for Barenbrug’s wild ower mixes and herbal leys. Since 2014, Cropvale has also been a trials site for NIAB. Nationwide, we are the only private site that monitors the disease performance of varieties as part of the Recommended List process.

BF: I’m guessing each day is different when it comes to managing the site?

Roger: Yes, no two days are the same. Obviously managing all of our different trial plots, and logging all the data is quite a complex, time-consuming process. With around 2000 plots sown every year, there is always something to do! But saying that, I like the variety it brings to the job and, after ten years, I’ve got the work down to a fine art with a tight schedule of jobs to follow week by week.

BF: Can you walk us through a typical day managing Cropvale?

Roger: There isn’t really a typical day. But I can tell you about the different kinds of activity that I do in each area of the site. During the main growing season, management of the forage plots typically includes walking and scoring the plots and taking down details of any disease observations. This is done every week.
When it comes to cutting, I have to mow and weigh each plot individually - making a note of the yield. We do this in line with general farming practices to give a true result. After cutting, it’s a case of feeding the grass to the cattle that graze our fields. Then I have to refertilise the soil before the process starts all over again. On the amenity side, our plots have to be mown twice a week over the same period as the sports that the grass has been developed for. I also have a wear machine that I have to use. This spikes the grass - replicating the impact that different boot studs have on a sward. Once a month, the Barenbrug amenities team travels over from The Netherlands to look at the overall management, review results, and help me top-dress the grass accordingly.

Roger: The biggest change has probably been in the machinery we use. The technology has moved on over the years, making all the different jobs much easier - although we’ve still got some of the original equipment on site.

BF: How has your opinion of grass changed since running the site?

Roger: Obviously, with our history of dairy farming, my family and I have always known the importance of growing good quality grass - but working with Barenbrug for ten years has really opened my eyes. Like most farmers, I never realised just how much time and effort goes into bringing new grass varieties and mixtures to market. It’s a fascinating process and I’m pleased to be part of such important work.

Roger: One of the best things is being part of a bigger team. It’s an absolute pleasure to run the site. I love growing and cutting the new varieties of grass, and generating data that ultimately makes a difference to livestock farmers across the UK. I look forward to continuing this work over the next ten years and to helping Barenbrug and its partners get even more information out of the site. 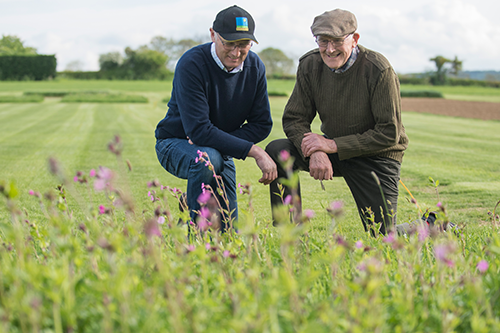