Most suited to: Any medium - long term ley which will be grazed or cut 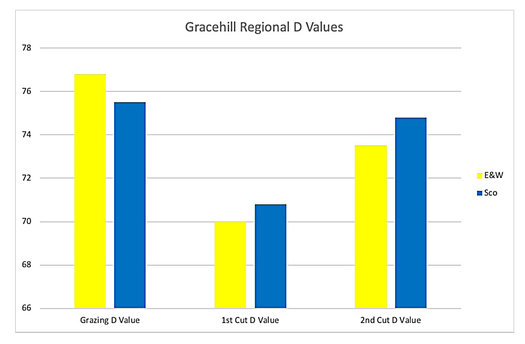 Gracehill has a strong all round disease resistance profile making it a variety than can be used across all regions of England and Wales. Crown rust resistance is 7.9, Drechlera resistance 8.7 and Mildew resistance 8.0.

Being a tetraploid, you should expect an average of 290,000 seeds per kilogram and a slightly more upright growth habit. Gracehill has ground cover scores typical of the tetraploid type and to encourage tillering, will benefit from grazing, particularly in the first 12 months after establishment.

Before official recommendation, Gracehill has been extensively trialled across 17 different site in the United Kingdom and Ireland to gather data on its performance in multiple climatic conditions.

Gracehill was named after a village just west of Ballymena in Country Antrim which was originally founded in 1765 by Moravians.

FLOWERING HEAD: Flattened spike with the spikelets arranged alternately on opposite sides of the stem. The spikelets are stalkless with the narrow, rounded face fitting against the stem.

LEAF BLADE: Ribbed on upper surface, smooth and shiny underside. Red at base of stem.

AURICLES & LIGULE: Auricles are usually well developed, up to 1/12 of an inch (2 mm) long, or are sometimes lacking.

The Gracehill grass variety can be found in the following;