Most suited to: Any medium - long term grazing and/or cutting ley - early growth is key

Glasker is performs well under both cutting and grazing management and is capable of producing high quality forage from both systems however due to its very early heading, it will require careful management to match harvest with maturity and optimise yield and quality. Glasker has the highest quality of all the recommended early diploids. 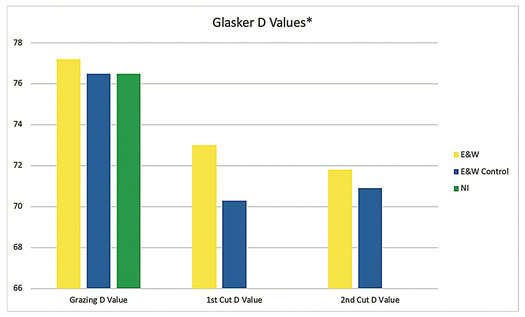 Being a diploid, you should expect an average of 600,000 seeds per kilogram and a slightly more prostrate growth habit. Combined with the high ground cover scores, Glasker will create a very dense sward.

Before recommendation, Glasker has been extensively trialled across almost 10 location in the United Kingdom to gather data on its performance in multiple climatic conditions. The variety was named after a townland near Banbridge which is most well known for the Glasker Mill.

FLOWERING HEAD: Flattened spike with the spikelets arranged alternately on opposite sides of the stem. The spikelets are stalkless with the narrow, rounded face fitting against the stem.

LEAF BLADE: Ribbed on upper surface, smooth and shiny underside. Red at base of stem.

AURICLES & LIGULE: Auricles are usually well developed, up to 1/12 of an inch (2 mm) long, or are sometimes lacking.

Where to buy
the Barenbrug
product range
Local stockist