Welcome to the April BarTech with thoughts, tops tips and advice from the UK Grass Experts.

The benefits of growing a maize crop to feed to livestock and AD plants are well known however there are some key issues with soil erosion and nutrient leaching when the maize has been harvested, particularly in fields on a gradient and or in water catchment areas. Also, damage to the soil structure and subsequent soil health, caused by machinery, can take years to repair and rebuild.

With the ever increasing awareness of carbon capture, looking after and improving soil health and as BPS moves towards ELMS, it is possible that establishing a green manure/cover crop in maize could become legislation, as it is for many parts of Europe. Some water companies have introduced schemes for undersowing maize crops to reduce nutrient leaching and soil erosion in catchment areas.

Benefits of undersowing with Proterra Maize 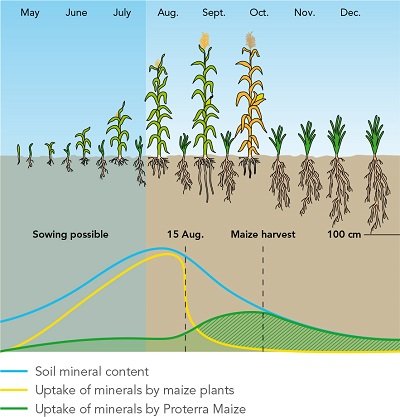 Developed for overseeding maize to establish a green cover crop, Proterra maize can help prevent soil erosion and nutrient leaching whilst maintaining soil structure and soil health following the maize harvest. Having little detriment to yield by having low competitivity with the maize crop compared to other grasses. Based on Tall fescue technology Proterra maize produces an extremely deep branched rooting system which has the ability to soak up nutrients from a much greater area within the soil and also enables carbon to be sequestered deeper in the soil profile.

If a green cover crop grows too fast, it may rob the main crop of critical sunlight, moisture and minerals. Proterra Maize germinates quickly, but after emergence it grows more slowly, since it first develops a deep, robust root system, offering little competition and giving the maize crop plenty of time to grow.

How to establish Proterra

The optimum way to establish Proterra maize is to Sow at 10kg/ha at the 6-8 leaf stage of the Maize crop using an inter row drill.

You don‘t have to worry about the soil being too wet for a good quality crop. The intensively branched root system characteristic of Proterra Maize creates a higher bearing capacity of the soil. This means that you can harvest when the crop is ripe without risking structural damage to the plants and soil. The deep root system also improves soil drainage, which in turn boosts the resistance of both the main crop and the green manure to extreme weather conditions. The larger amounts of organic matter underground help to create a more fertile soil for better following crop performance.

Proterra Maize was trialled in the UK last year and outperformed all other treatments in the trial in terms of maize yield and ground cover. Different mixtures of Proterra maize have been used successfully in Holland and we are looking at variations on these for the UK that will be trialled this year. 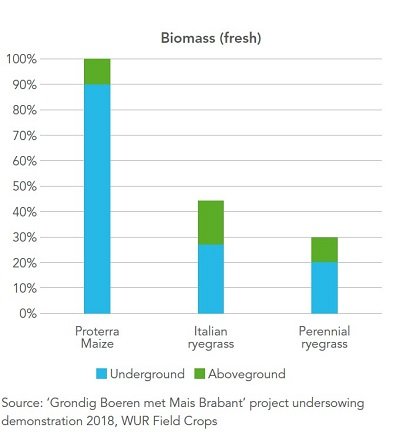 Our trials have shown that performance is variety specific so it isn’t just a case of buying the cheapest tall fescues in the market as not all of them work.

Back to BarTech April

Quick and easy undersowing solution for maize crops in your rotation producing a green cover which doesn’t compete with the crop.

High-yielding and rich in protein, drought tolerant from deep roots